The effectiveness of means of protection against birds for example personal infield.

Continue a series of publications from our scientific consultant for ornithological protection of objects of C.b.N. Vassily I. Grabovsky. In this publication the example of personal infield understand the reasons for the effectiveness or ineffectiveness of defenses against birds, and also explains the concept of the ornithological load.

The story of how I tried to protect your strawberry crop from blackbirds or why details are important.

I have a house in the village. In the Kostroma region. It stands apart from other cave houses and once it was surrounded by fields. And now there grew a forest, with the exception of the clearing of 20 acres, which is enough time and energy to abrasivity. The woods are different. It usually starts with willow or birch, which, after many years, turn into interesting, and sometimes right there is a young spruce forest. I have around the house mainly willow. As you know, willow short-lived. In 20-30 years, it gets old, begins to fall, forming blockages. This is exactly what I see out of the Windows. Can't say that this forest pleases my eye, but the eyes of thrushes, the fieldfares is definitely happy. There was a large settlement of these noisy and gregarious birds. They build their nests in different creases, forks and even my woodpile, and I think all around their land. 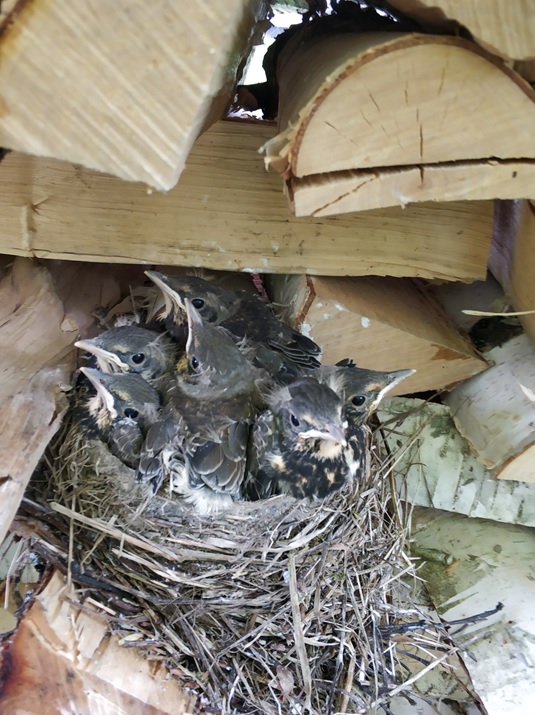 No doubt as to their property they reacted to my bed, where I spring planted some strawberries. The nearest nests from a few metres away. Next to the bed I stuck with my "friend" - a stuffed animal that I with ten years ago do to protect my two cherries, suddenly decided to bring a crop. The crop, incidentally, survived, and stuffed ever since and wanders on the site.

That's the background against which the subsequent unfolding of events. And the events here. Strawberries are beginning to ripen, but is more or less ripe berries were relevany thrushes. By that time they already had quite a flying juveniles, old enough to independently walk and eat, but still too young for serious travelling with their parents. That is, the development of the surrounding world of the young birds occurred far from their native nests and from my garden beds with strawberries. But, as the saying goes, "you got the wrong guy". I decided to apply my knowledge in the field of protection from birds and decided to install visual repellents, widely used for repelling birds – various shiny objects. Professional tools, like holographic tape and mirrored spirals under my hand was not there, but I remembered the New Year, got a toy box and pulled above the bed all sorts of garlands and "rain". The view was stunning: birds for unfamiliar objects shimmered in the sun and was moving in the wind. There was a feeling that the harvest is now under my protection...

But there it was. The next morning everything was in place. Ripe berries Polevoy, and remains the most Mature was lying next to the bushes... 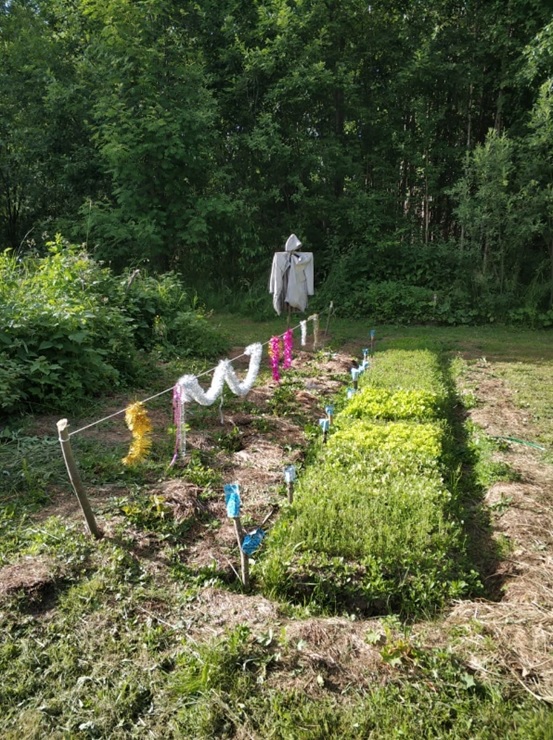 What's the matter? It's all supposed to work. And the Scarecrow is, and shiny objects, and their movement, but no result!

But here's the thing. There is a concept "bird pressure." This is a measure of how difficult it is ceteris paribus to be protected from birds. And here it was very high. The money that under other circumstances would have worked, it was not effective. Why?

What we have in this case. Scarecrow – a familiar element of the landscape. It's here for several years. None of the local birds have not paid attention to him –used to. Shiny premery. Usually they are some time efficient. We do recommend to protect the crop... Well, the point here is that the bed is within the center of the nesting activity of birds and they know the environment thoroughly. Everyone here is familiar – "my house-my fortress". And here comes a strange subject, which in other cases birds prefer to fly around the side and not understand it is dangerous or not. Here we had to deal... And my blackbirds figured out very quickly – within hours, in contrast to the usual addiction to such items, which requires days. The sun in these latitudes and this time of year gets up early and while I was sleeping strong morning sleep, thrushes realized that there was nothing in this new year's tinsel and no desire to eat sweet berries overpowered the fear of the unknown. In addition, the thrushes, fieldfares always have a lot of neighbors. It is enough for one brave man or a carefree simpleton to eat strawberries, as all understand: "you can!".

That's the story, which is instructive because it shows how important details...

PS After a bad experience with sequins, I pulled on the patch mesh and still tried their strawberries!