Destruction and fight with moths

Effective control of this pest of expensive materials is an important task not only for individuals but also for textile enterprises, warehouses and shops. The chests and cupboards of our grandmothers, we were surprised to find a lavender — at that time the most effective means for the destruction of the moth and its larvae. How many children's joy and wonder was caused by hanging in the sun in the height of summer coats and coats! Or grain that grandmothers and mothers went through, sifted and God knows what I was doing with them.

Now it is not causing quiet laughter of children, for we realize that all of these labor intensive and regular homework activities were carried out with one very important goal — the discovery of the mole and its destruction.

But, while there are fur coats, rugs and cereals, there will be a mole. Let's see, what is this insect and what is now there are tools and methods to combat it.

Mol (lat. Heterocera) is an insect of the order Lepidoptera butterflies. Insect — pest materials. Today on the planet there are more than 73,000 species of moths. Moles are very resilient and hardy. Able to exist in the bitter cold, and heat (up to 60 Gy.C). Prefers nocturnal and crepuscular lifestyle. Thanks to this "weakness" is applicable and effective one of methods of struggle with moth — physical, i.e. exposure to bright light.

The method of reproduction in insect typical of the squad, laying eggs, development of larvae, cocoon, butterfly, mating and laying. Of particular note is the period of development of the caterpillar, for it was during this period the insect is most protected from the effects of adverse external conditions (larvae hibernate under the influence of low temperatures or bright light) and deals maximum damage, as they feed intensively.

Since the moth, like most insects, are extremely viable and reproductive, the extent incurred financial losses from damage of material or product can be enormous in a very short period of time. This is the insidiousness of this pest.

For the food industry, barns for storing crops, tailoring, sewing, warehouses, large shopping centres, and just in everyday life, a particular danger in our middle climatic zone are two species of moth — clothes (or fur) and food moths. The damage caused by these insects, and methods of dealing with them we will pay special attention. 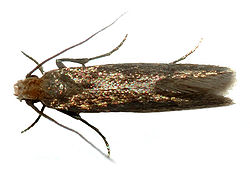 This family includes many species that live in different places of our planet. In appearance the moth resembles a real unattractive, dull, moth, wings long and narrow, their posterior edge covered by a broad fringe of hair, well-developed maxillary palpi, but the proboscis is not enough. Phytophagous representatives of this family live in rotten stumps, tree trunks, nests of birds. Many species of this moth feed on food of animal origin: bones, hair, fur and skin. They are capable of, due to the special acidity of the stomach, to process heavy organic compounds. The real moth is a threat to agricultural production and the stored property. 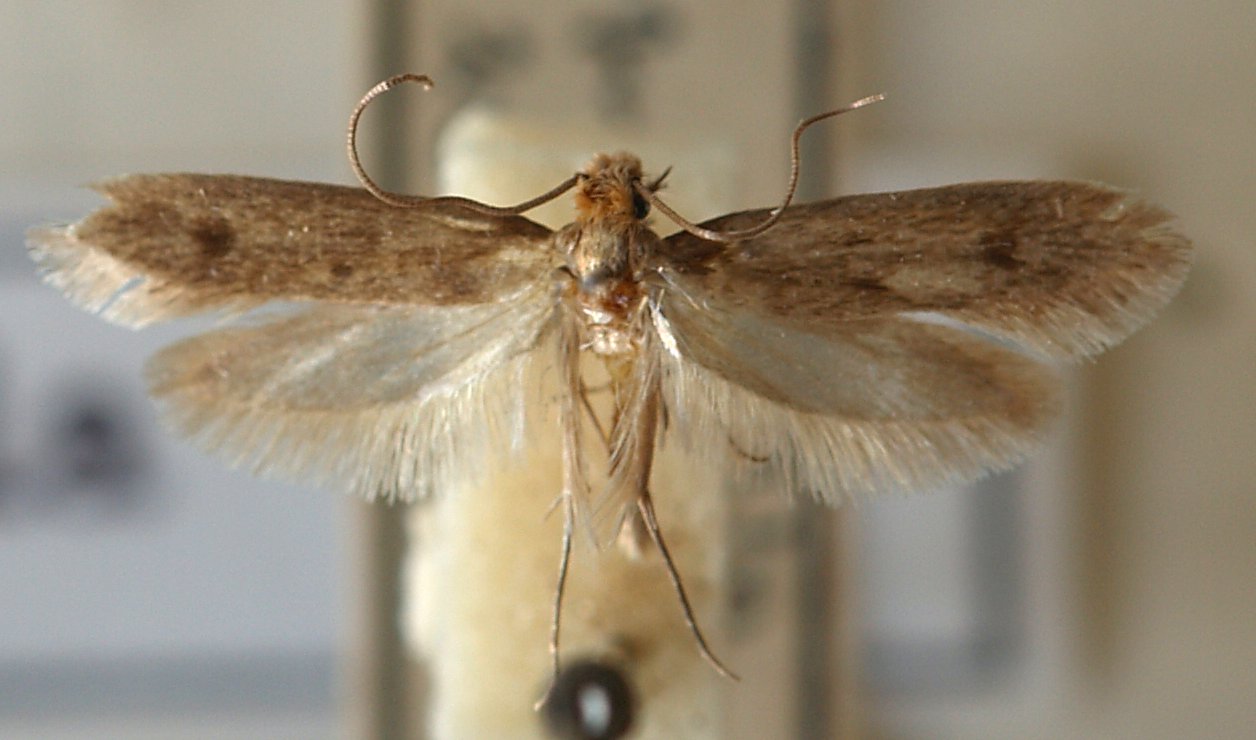 Mole fur has a brownish-yellow color, the lower wings are light gray with yellow tint, on the front there are two small and one large dark spot. A wingspan of about 150 mm. Caterpillar fur of the mole is harmful for the fur, it lives in a figurative-shaped case. In appearance it resembles a white worm with a brown head color and with four pairs of limbs. Through the transparent skin of the caterpillar can be seen the contents of her stomach. 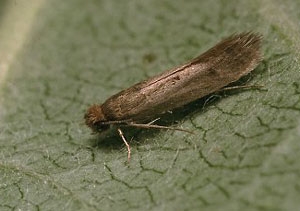 The main difference between moths from a fur coat are larger body size, the wingspan of this insect reaches 220 mm. Caterpillars live in pieces of woolen and worsted fabrics, on the inner surfaces and the folds of clothing, the top front layer is not affected. Fore wings of this insect are painted in violet-brown tone that is closer to the middle of the pass in a light yellow hue. 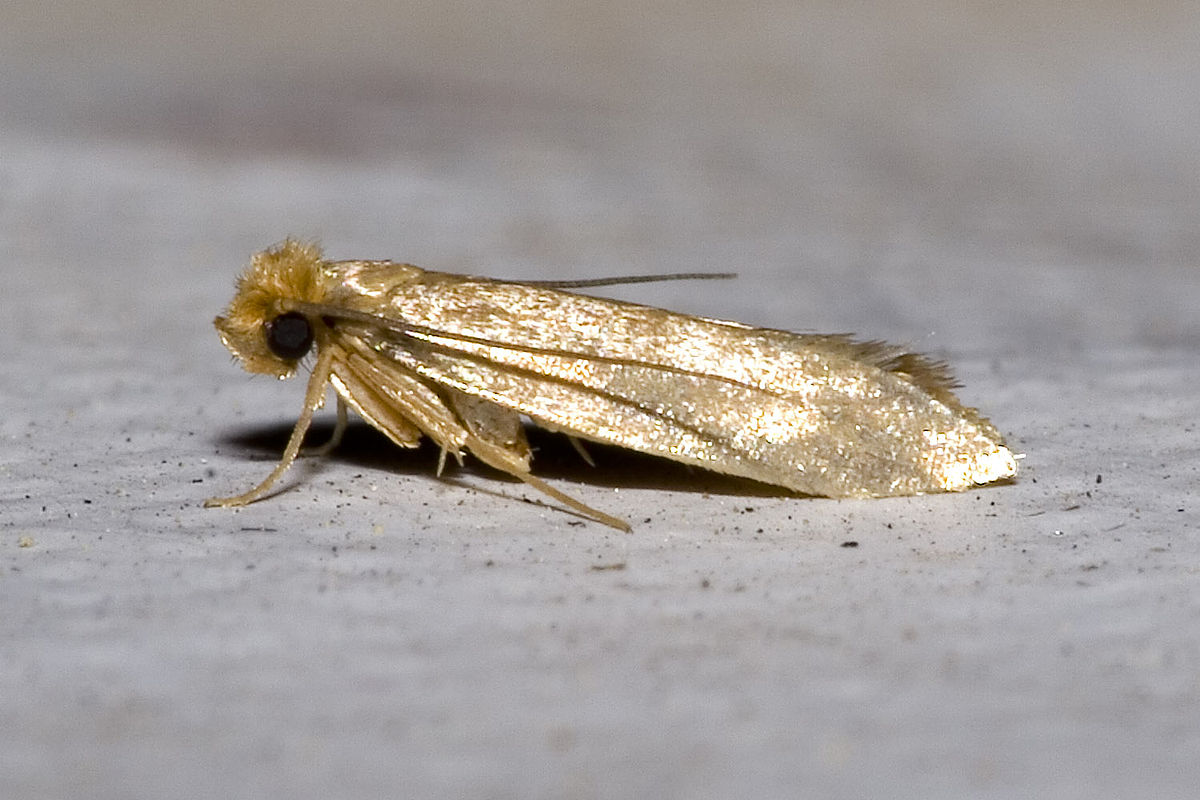 For the first time studied and described the furniture was moth entomologist A. Hummel in 1823, the distinguishing feature of this species is the absence of labial tentacles. The adult has a light yellow colour, the base of the front wings has a brown hue; head is dark color. The caterpillar of the moth feeds on furniture furniture upholstery, in the stage of pupation, it eats track in the upholstery fabric and invalidates the tire. The incubation period of the caterpillar is accelerating in the summer months and slows in the cold season. Primary pupation occurs in February and continues in the spring, the secondary starts from mid-summer. 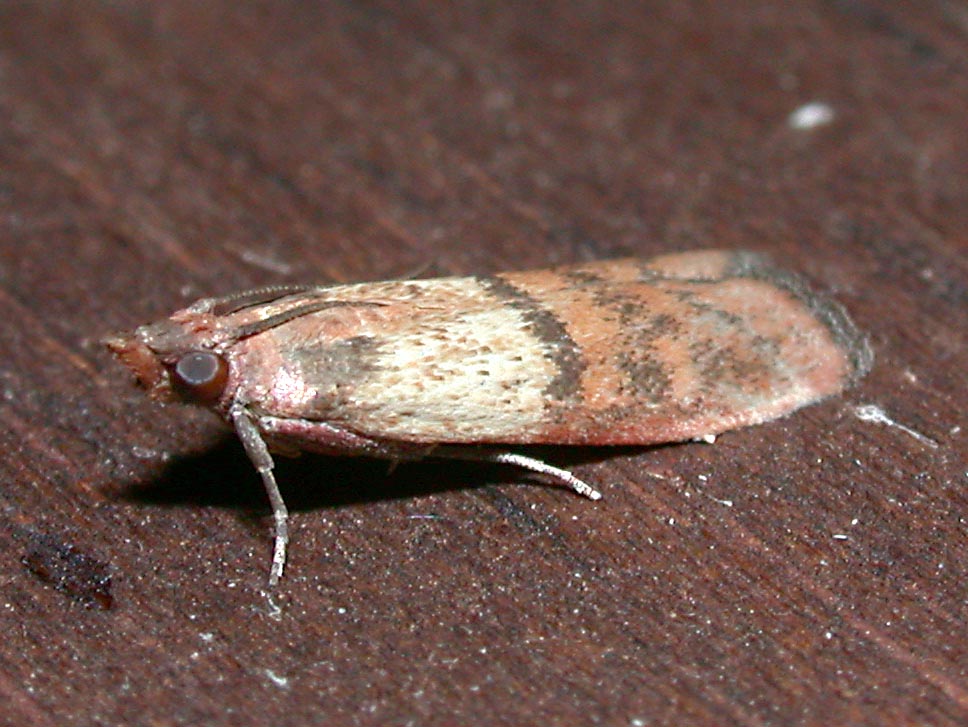 Grain moth develops in the woody mushrooms and the bark of rotten trees. The size of the insect reaches 10 mm. Is a forest dweller that can penetrate into the grain stores and lay one or two eggs directly on kernels. In a well-heated rooms, the insect is able to reproduce several times a year. The hatching of caterpillars occurs after 14 days, they begin to weave the silk-shaped case and cause damage to the contents of the repository (not only grains, but also seeds of agricultural and ornamental crops, forage, vegetables, dried fruits, mushrooms). The caterpillars live on the surface without penetrating the deeper layers. Before wintering the mole moves into the cracks and crevices of the ceilings, walls, floors storage. Following pupation occurs in the spring months. 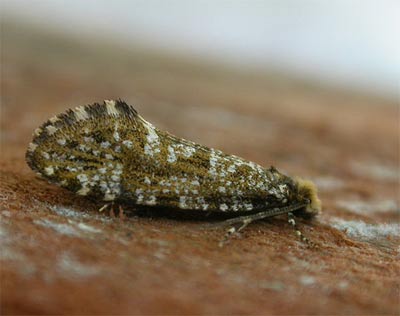 In appearance the mushroom is a moth a butterfly a brownish-gray color that has bronze tint on the rear fenders and intense brown spots on the front. A wingspan of up to 150 mm. are the Most widely this insect is widespread in the Palaearctic, where it feeds on rotten wood and tree fungi. The mushroom mole going in large groups and migrate from the forest to urban squares, parks, grain storage. This is one of the most expressive examples of how forest insect turns into a pest. Mol harmful fungi, grain, dried fruits, making them unfit for human consumption.

Methods of dealing with moles

There are a number of measures for the destruction of the moth as food and clothes. However, again, the most important is to recognize the danger. We use a special pheromone traps containing the sex pheromone of the moth. These traps attract the males of butterflies at a very great distance. If the room has at least one butterfly — she will definitely fall into this trap.

Use paramonovich traps allows not only to carry out reliable monitoring, but also boritsya the contamination, because of selective trapping of males to interrupt the process of reproduction.

However, the most effective method for controlling moths, is a chemical method for the destruction and prevention of this unwanted insect. And no matter what the area of distribution of the moth Your wardrobe or the corn crib. It is important to detect and take action. But such prompt and efficient work under force only to professionals. For residents and legal entities of Moscow and Moscow region there is a reliable and time-tested assistant — OOO NCPI "AGROKON".

Quickly, effectively and efficiently we will help to get rid of any kind of moth. And, most importantly, our means of destruction, modern and safe for humans. Moreover, the cost of our services is low compared to similar organizations for disinsection and the destruction of insects.